Key and Peele were an incredibly popular comedy TV show. Keegan-Michael Key was born March 22, 1971, and Jordan Peele was born February 21, 1979. Why do they make such comedy gold together? 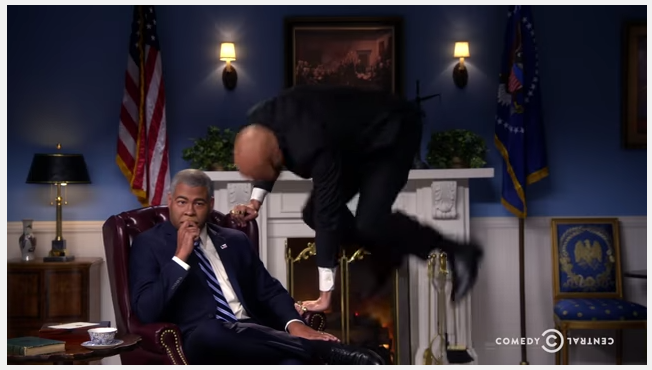 Keegan-Michael Key is an Aries Pig, Ace of diamonds 3 of clubs. Jordan Peele is a Pisces Goat, 4 of diamonds, 8 of diamonds.

As an Aries and as an Ace, Key is like a double Aries. He has tons of energy, and he loves to get into the fray. That’s why in their sketches he’s so often the one who shows anger, righteous or otherwise. He loves fights, and this is why he’s Obama’s anger translator, why he gets so mad in a text message exchange.

As an Aries he’s also very loyal. That’s why he’s chosen to be the loyal boyfriend in his sketches with Meegan (played by Peele).

Meanwhile Peele fully acknowledges Key has way more energy than he does (in an interview with Conan), and he likens himself to a remora attaching itself to a passing shark and eating the food that falls out of its mouth. Very much in the character of a dependent goat.

However, since Peele is also a pisces, in the neptune row, he’s always fantasizing. And as an 8 of diamonds, he is neptune to Key, which means they can have a lot of fantasies and dreams about each other. This is why they’re so good at coming up with improbable hilarious sketch comedy scenarios.

As a four of diamonds, and as a goat, Peele will be fundamentally lazy, but knows that he needs to exert himself to get where he wants to go in life. Luckily he’s hitched up with Peele, who has enough energy for both of them, despite being 8 years older.

As an Aries Pig, and as two fundamentally weak cards, (the Ace of diamonds and the 3 of clubs) Key will be loyal and trusting towards his partner, and will also follow Peele’s lead sometimes. Because of the Neptune connection, Peele will inspire Key to greater comedic heights, simply by being.

Interestingly, despite being an unmarriageable combination, Keegan-Michael Key stayed in his last marriage from 1998 to 2015.

Meanwhile Jordan Peele eloped with Chelsea Peretti, born February 20, 1978, in 2016. Their connections are easy to see, as she’s a 5 of diamonds, Jack of diamonds pisces horse, a double diamond like Peele is. He’s also moon to her, a perfect position for a goat to be in. He loves to depend, and as a horse, she likes having a goat around to beautify her life. As they are both pisces, they will both feel deeply, and intuitively understand each other. Her restless tendencies as a 5 of diamonds will be tempered by his interest in travel as well, as his first karma card is the 5 of spades, and they will take pleasure in traveling together.