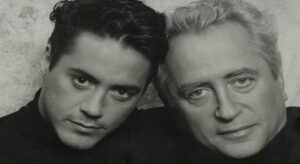 Downey Jr. was born on April 4th, 1965, which makes him an Aries snake, 4 of spades and 8 of spades. He shares some beautiful connections with his father. He is his father, Robert Downey Sr’s, first karma card.

How? Robert Downey Sr. is the 6 of clubs, 8 of hearts. Robert Downey Jr.’s PRC is sun to the 8 of hearts first karma card, the 7 of spades.  So it would have been easy for the son to follow the father into show business, as he looked to his dad for direction and advice. Unfortunately his dad also introduced him at the age of 6 to drug use, and from there he spiralled quickly into addiction. 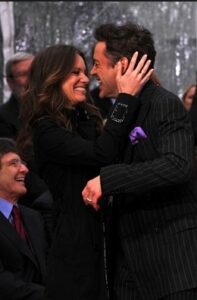 Robert Downey Jr. loves working. He is a double spade, a 4 of spades and an 8 of spades (both pretty powerful cards on their own). But no one could control him, until he met his wife.

You can see this because he didn’t turn his life around and stop using drugs until he started working with his now wife, Susan Downey. Why do they get along so well?

Downey credits his wife with helping him kick his drug and alcohol habits. “The old saying is true – behind every good man there’s an incredible woman. I owe a huge amount – if not all – of my success to Susan. We make a great team, and all that luck I spoke about, that’s Susan.”[19] Sherlock Holmes director Guy Ritchie describes the couple as “the greatest illustration of a symbiotic marriage that I’ve ever seen. It’s a real yin and yang, and it’s made him a joy to work with. Robert would be a pain in the ass if he didn’t have Susan to police him. (more on Susan Downey)

Why does Susan police him? Because she’s his Saturn card. Robert Downey Jr. is the 4 of spades, which has Susan’s birth card, the Ace of diamonds, as its Saturn card. She will remind him how he can be better.

He even acknowledged her in his Golden Globes acceptance speech, by saying,

“I really don’t want to thank my wife because I could be busing tables at the daily groom right now if not for her. Jesus, what a gig that would be.”

They also have a nice Chinese astrology connection, as Snakes and Oxen get along famously.  Oxen can be reserved, and need an ultra-sexy snake to help them let their hair down. Oxen can also boss the snake into telling the truth. Snakes love the money and stability that Oxen can provide. Win-win!