Who were the loves of his life and how were their relationships in the cards?

David Bowie was a Capricorn Dog, born on 8 January 1947, making him a 6 of spades, 3 of hearts. When you’ve got a 3 of hearts in your life spread, it can make you creative, but also a bit confused about your sexuality.  His Karma cards are the Ace of hearts, the 9 of spades, the 2 of spades and the Queen of clubs. The six of clubs could make him karmically stuck at times. It was hard for him to pull himself out of a rut. That’s where the 3 of hearts, ever creative, and ever striving for the new, would come along to kick his butt. As you can see, he had many changes over the years as he asserted his rebirth and individuality over and over again. 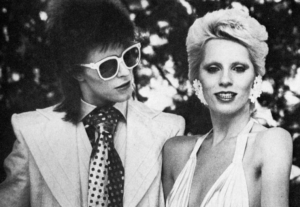 Angie Bowie was born September 25th, 1949, making her a Libra Ox Queen of Hearts, Eight of Diamonds. David Bowie was moon to Angie Bowie, making this marriage last for over 10 years, from 1970 to 1980. The sun moon connection is perfect for marriage. With her 8 of diamonds she loved being in the spotlight with him. He probably left this marriage because he wanted to be someone in the world, and when you’re with your moon card, you’re always helping them shine. As soon as he divorced her and went to America, in 1981, he started making hits.  This is no coincidence.

His connection to Iman is not as easy to see.

Iman was born July 25, 1955, making her a Leo Goat, 3 of clubs. Her karma cards are the 5 of diamonds and King of diamonds.  She and David Bowie were married from 1992 until his death. What are their connections in the cards? 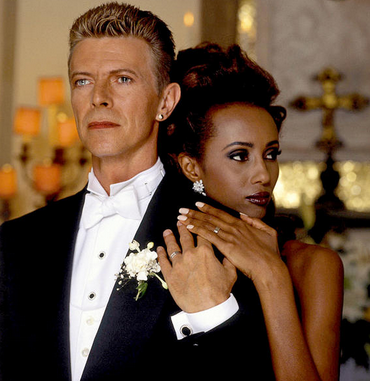 They had a vertical venus connection from his karma card, the 2 of spades, to her birth card, the 3 of clubs. That means he loves her. That vertical connection also means he’s her Uranus card. This is a card of true friendship and freedom. Freedom was very important to David Bowie. He needed space to discover and rediscover himself, because of the Ace of hearts. The Ace of hearts first Karma card can be like being reborn over and over, and indeed he was reborn in different incarnations in his career. Once he found someone he could be free with, he felt happy and content.

This is what made their marriage so loving and relaxed. Most of their pictures are of them laughing together.

They also had a mutual vertical Jupiter connection between his karma card, the Queen of Clubs, and her 3 of clubs. That meant that they loved to give to each other, another perfect connection for marriage. As the Queen of clubs, he was very much the Queen in their marriage, and with her King of Diamonds second karma card, she was very much the King. With her 5 of diamonds first karma card she needed room to roam, and he was happy to give it to her.

Their marriage was probably both friendly and loving, giving and receiving. It strengthened both of them and they were both grateful for the stability it provided.