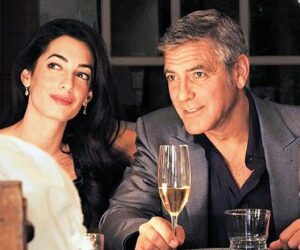 George Clooney recently married Amal Alamuddin. He’s been down the aisle before, and had lots of girlfriends too. Is it true love this time?

George Clooney was born on May 6, 1961, making him a Taurus Ox, King of Diamonds and Four of Clubs.

Amal Alamuddin was born on February 3rd, 1978, making her an Aquarius Snake, Nine of Spades and 2 of diamonds.

Want to guess what one of the best connections is in the Chinese Astrology system?

Yep. Ox and Snake. Snake is sexy and cool, Ox is a hard worker that loves how the snake twines and squeezes. They are both strong and the Snake loves the money that the Ox brings. Ox loves how the snake brings them sensual pleasure. Snakes tend towards dissipation and fibbing. But Amal might not be like that, as we’ll see below.

Normally Taurus Oxen can be very serious, but there is always that twinkle at the corner of their eye that is waiting for the laughs to come. Being with an international human rights lawyer would certainly fit with the serious Taurus Ox image, and would balance out all of the bubble-headed models Clooney has dated in the past.

But what about their destiny card connections?

Is this true love? Is it going to last?

Amal’s birth card is the 9 of spades. The nine of spades has the King of hearts as their first karma card. She probably had a hard time finding someone who could handle her need to control things at home. Her two of diamonds planetary ruling card makes her more open to partnership than the average 9 of spades. Because her first karma card with the two of diamonds is the six of clubs, her natural tendency towards fibbing as a snake may be curtailed. She concerns herself with the truth, and knows that she has swift retribution for telling lies. Perhaps this explains her profession as an international extradition and human rights lawyer.

George Clooney is known for getting lots of movie roles despite his advanced age of 53. As a King of Diamonds, he can get what he wants, when he wants it. His first karma card, the 3 of clubs, can make him a little more worried than he appears on the outside. Clooney’s four of clubs planetary ruling card makes him more stable and level-headed than other cards. And his first karma card of the 5 of clubs allows him to enjoy travel and changes more than other cards. As a movie actor this 5 of clubs would serve him well. Since his wife is a British citizen he will be doing a lot of travelling back and forth to England as well.

How do they connect? Their first connection is a mars connection between her 9 of spades and his King of diamonds. this can make for a lot of arguments and hot sex.  This could have made a one-sided love affair on Amal’s part.

However, their second connection, between George Clooney’s King of Diamonds and her 2 of diamonds is a Mars connection too, which means that he has an equal attraction to her. Having these two connections as the first two connections can be hard on a relationship. You have to do things together to keep that energy moving. You cannot just sit around together unless you like arguing, fight and make-up sex.  Luckily they have other connections to balance it out.

His planetary ruling card, the 4 of clubs, is moon to her planetary ruling card, the 2 of diamonds. That means that he sees her as his sun, he wants to support and help her, and for her part she feels that he helps her shine. She is superior in this relationship. If George acts as her teacher, she may also act as his teacher. Despite their age difference and the difference in their fame, it is a marriage of equals.

They love being together, they find the other one incredibly sexy, and they have things to learn from each other. They may have some incredible fights if they are forced to be idle, so to make this marriage last, they should work out together, travel together, and do physical things.

What do YOU think of this connection?