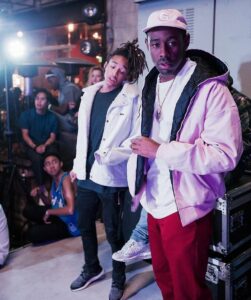 Jaden Smith and Tyler the Creator are dating!

What are their cards? Jaden Smith was born on July 8th, 1998, which makes him a Cancer Dog, and Tyler the Creator is March 6, 1991. A Pisces goat, a tentacular heap of human litmus!

Jaden Smith is known for being really weird, being into conspiracy theories, and generally just doing as he pleases. He’s a 7 of diamonds, which makes him a semi-fixed card, which does make him odd. He’s also a 7 of hearts, which makes him have a hard time in relationships.

Well, Tyler the Creator is a 4 of spades, 5 of hearts. This makes him a hard worker, but also someone who takes crazy risks and doesn’t think about the outcomes. He wants stability, but he also has a crazy side. He might have many lovers at once, or none at all, just for the experience. As a goat he can be even more kooky and creative than the average 5 of hearts. He’s always creating things. But he keeps silent about his private life.

Frank Ocean reveals in his song Ivy that Tyler the Creator was one of the first people he fell in love with. Frank Ocean was born October 28th, 1987, which makes him another 7 of hearts, Jack of hearts and King of diamonds. His song says, “I thought that I was dreaming, when you said you loved me.” Now it seems that perhaps Tyler the Creator has had relationships with men before in his life.

They are both weird! Tyler the Creator and Jaden Smith might just have the right kind of weird to be good together! Jaden’s 7 of hearts is venus in the past life spread to Tyler’s 5 of hearts.

So Tyler will be really attracted to Jaden, and he will also be interested in giving to him.

Both men have had relationships with men and women, so they identify as bisexual, not as gay as some newspapers are reporting.