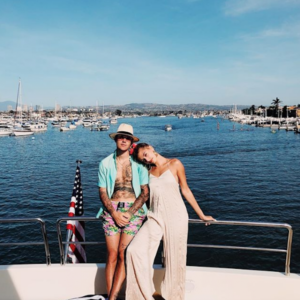 They are delaying marriage until he gets his mental health together.

What are their connections in the cards?

This makes him a Pisces Dog, and this makes her a Scorpio Rat.

First of all, they are both water signs. This is good! They can connect with each other on a watery, emotional level. however, Dogs and Rats? Not so much.

His two cards are the 9 of spades and the Jack of spades. It makes him a double Pisces, very sensitive, very giving. Jack of spades is a card that can be a little crazy and too risk-taking at times. Luckily Justin sees his father as a negative example of trying to shirk responsibility, and he is in therapy, so he may be more self aware than the average Jack of Spades.

Hailey is Jack of hearts, 2 of hearts and 2 of diamonds. As a Scorpio she feels deeply- and being a Jack of hearts, aka the Christ card, she can ALSO be sensitive, and feel like she does nothing but give. They are both spiritual, and go to the same church, which helps them stay focused on the positives in their relationship. She will act like a double heart, and may not be able to

This means that she is NOT a spade, and he has TWO spades as his birth cards and planetary ruling cards. When people’s birth cards are not sharing a suit, it can be harder for them to connect. However, they are both Jacks! That means they will like to have fun together. She is the Jack of hearts, and he is the Jack of spades. They are both members of the royal family.

Aside from this, they have a lovely sun-moon connection between his 9 of spades birth card and her first planetary ruling card, the 2 of hearts. This means he will love to support her, and she will be the leader in the relationship. They also have a venus connection, flowing from Hailey’s Jack of hearts birth card to Justin’s 9 of spades. She truly and deeply loves him.

Hailey and Justin also have another sun moon connection flowing from her pluto card, the 2 of diamonds, to his planetary ruling card, the Jack of spades. This means that he can also be the leader in this relationship.

This is a loving marriage, and hopefully they will publicly tie the knot soon!