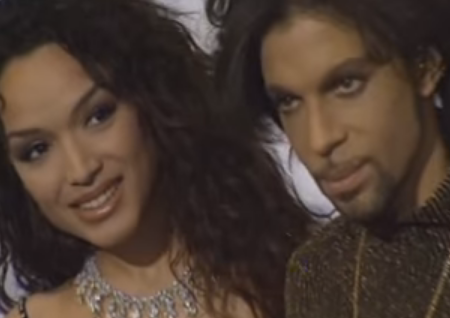 What were his major relationships? According to Wikipedia, when he “was 37, he married his 22-year-old backup singer and dancer Mayte Garcia on Valentine’s Day 1996. They had a son named Boy Gregory on October 16, 1996, who was born with Pfeiffer syndrome and died a week later.”

Prince was born Prince Rogers Nelson on June 7, 1958, making him a Gemini Dog, 10 of diamonds, 8 of spades. As a 10 of diamonds, he would always put his career before his relationships. As an 8 of spades, he was a super worker, putting out 39 studio albums and touring around the world.

With the 10 of diamonds and the 8 of spades, he was a strong personality and created a place for himself in a world that had no place for a gender bending black male singer. He was able to be fully himself and make the music he wanted to make because of the strength of his work ethic and personality.

Prince’s first wife, Meyta Garcia was born November 12, 1973, making her a Scorpio Ox, 8 of clubs, 10 of hearts, Queen of diamonds. As a fixed card, and another 8 and 10, she was more than able to hold her own with Prince’s strong cards, the 10 of diamonds and 8 of spades.

As a Gemini, he was pretty airy and not at all like the watery Scorpio. With their Chinese signs, the dog and the ox are not really compatible. However, with an electric personality like Prince, having a good, steady Ox waiting for him at home would feel comforting and stable. Looking closer, they have more in common than not.

What were their destiny card connections?

Prince was Meyta Garcia’s sun card, as the 10 of diamonds, he was the leader in their relationship. This was probably hard for her sometimes as a fixed card, the 8 of clubs, and a 10 herself. As an 8 of clubs, brains were not the problem, and as a 10 of hearts, she’d be happy with the parties and shows surrounding Prince.

The connection between Prince and Meyta’s two birth cards was a Jupiter connection, which means that he would like to give to her.

They had a second Jupiter connection with her PRC, the Queen of Diamonds, and his PRC, the 8 of spades. This means that she would like to give to him as well. This is one of those perfect connections for marriage.

With his PRC, the 8 of spades, we see a Venus connection between him and Meyta’s PRC, the 10 of hearts. As her Venus card, she will simply love him. They got divorced in 1999. As the sun card, it was probably Prince’s idea, and Meyta Garcia was devastated.

Prince had many many relationships, but one that particularly left its mark was his relationship with Susannah Melvoin in 1985.

Prince was engaged to Susannah Melvoin (January 26, 1964, Aquarius Cat, Ace of diamonds, 7 of clubs), and he wrote a song “Nothing Compares 2 U” about her. She was his mars card, and his venus card in the Life spread. This means that he would both be wildly attracted to her, and love her. She would also make him angry. Because she was the Ace of diamonds, she didn’t really have a need for him around. Her second karma card as the Ace of hearts meant that she was quite comfortable being alone. As a Cat, she avoided conflict, and with a rock star like Prince around, there was probably a lot of conflict.

Susannah Melvoin was also Prince’s Pluto card, representing everything he wanted to achieve in his life. When you get together with your pluto card, they can be a constant reminder of how you can be better, even if they don’t say anything to you. It must have been a difficult relationship for Prince, with all of the connections flowing one way, from him to her. One of the biggest issues the 10 of diamonds has is the inability to receive, and getting together with an Ace of diamonds with these connections would continue that pattern of him giving and her receiving. When she broke it off, he was devastated. He wrote the song below.