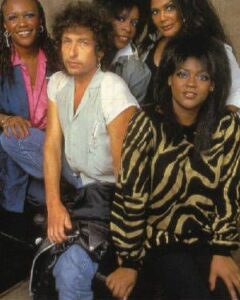 Bob Dylan, singer songwriter, was born Robert Allen Zimmerman on May 24, 1941 making him a Gemini Snake Eight of Clubs, 6 of diamonds.  As an Eight of clubs, he will have an incredibly powerful mind. But as it’s a fixed card, he will also be tremendously STUBBORN. No one can convince an Eight of Clubs of anything. As his six of diamonds planetary ruling card, he will work hard not to show people how much he’s sweating or upset. Six of diamonds is the competitor card. They also have a secret need for love that is hard to meet. Which is possibly another reason why he has so many love affairs.

Carolyn Dennis, famous singer in the josephine baker movie, and backup singer to Bob Dylan, was born April 12, 1954, making her an Aries Horse 9 of Diamonds and King of Clubs. Nine of Diamonds is known for wanting to be treated like royalty, and being bummed when they are not. They have a lot of disappointments in their lives, but they can gain peace by going universal. Their card is the card of universal values, and giving. It’s also a very piscean energy. Which clashes pretty hard with the Aries side. As her planetary ruling card is the King of Clubs however, she will have the mental power to be a match for anyone. She could certainly keep Bob Dylan’s powerful mind interested!

He and Carolyn Dennis were together from 1986 to 1992, and had a daughter together, Desiree Dennis-Dylan.Their marriage was secret and only came out in the unauthorized biography of Dylan in 2001. As an Aries Horse, she was loyal to him, but as a slippery Gemini Snake, he was slithering into and out of lots of different love affairs.

What were their connections in the cards?

They are both clubs and diamonds, which means they understand each other, they both care about ideas, concepts, values, and money.

There’s a past life saturn connection of the 8 of clubs to the King of clubs, which means that Carolyn Dennis could very easily see Bob Dylan’s flaws, and would be a natural teacher for him. He would have to be ok with this student relationship, and since he was richer, more famous and older, he probably didn’t like it. With the saturn connection you can feel criticized all the time, though the past life saturn is less intense than life spread saturn.

They have a past life mars connection from his 6 of diamonds to her 9 of diamonds, which is a very sexy connection. This can be perfect for working together, doing sports together, or otherwise doing activities. It can be harder when there is less to do together. And perhaps their breakup coincided with the end of their working relationship.

They are far apart in the life spread, however, which may explain why this marriage only lasted 6 years.