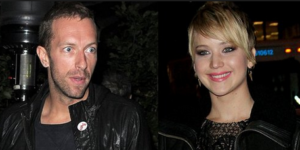 Jennifer Lawrence was born August 15, 1990, which makes her a Leo Horse, Jack of Clubs. She is best known for her role as Katniss Everdeen in the Hunger Games movie series.

Chris Martin was born March 2nd 1977, making him a Pisces Snake, 8 of spades, 9 of hearts. He is best known for being the lead singer in Coldplay. He is wonderful at emoting, and singing, and clinging to his loved ones. He’s not necessarily good at being the leader in a relationship.

Since Chris Martin broke up with his wife, Gwyneth Paltrow (10 of hearts/8 of Spades, Libra Rat) he has been seen out and about with Jennifer Lawrence. He had far more connections with Gwyneth Paltrow than with Jennifer Lawrence, but two 8 of spades in relationship together can be a real power struggle. Not to mention adding the power hungry rat. And Rats and Snakes are not the best combination. If Paltrow had been an Ox they would have probably stuck together longer, as Oxen and Snakes are a match made in heaven.

What are Jennifer Lawrence’s and Chris Martin’s connections to each other?

Jennifer Lawrence is Chris Martin’s Jupiter card, which means he will love to give to her.

As a Jack of clubs, she is marriageable, but she loves to argue. As a firey Leo Horse, she will do anything for her lover when she’s head over heels. Otherwise she will take love in a more cavalier fashion.

Chris Martin as an 8 of spades is a strong card, but the 9 of hearts makes him act weak sometimes. Life changes can be hard for him, and going from a relationship with Gwyneth Paltrow to Jennifer Lawrence so quickly shows he is uncomfortable being alone. As a 9 of hearts, he’s immature in love and he has a hard time delaying any of his personal desires.

Chris Martin’s karma cards, the King of Clubs, gives him a past life Venus connection with Jennifer Lawrence, making her love him. His second karma card, the 6 of clubs, makes Jennifer Lawrence his Saturn card in the past life spread. That means she is superior to him. And he would have to see her as a teacher for it to work. Since she is 13 years younger than he is, I doubt that would happen.

The on-again off-again nature of their relationship is probably due to Chris Martin’s need to control and cling, and Jennifer Lawrence’s need to be free, as a Leo Horse and as a Jack of Clubs. The keyword with Jack of Clubs is Freedom. Her first karma card is the Jack of Diamonds. This makes her a bit immature as well, wanting to be part of the royal family, but not wanting to wear the crown. She needs freedom more than anything.

I would say since the life spread connections are flowing one way, towards Jennifer Lawrence, this relationship is going to last as long as she wants it to.